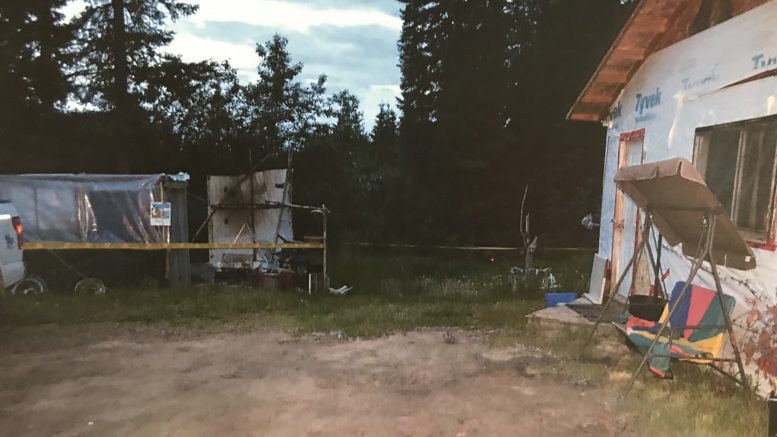 A photo of the scene of the crime from an incident that left a 27-year-old man dead in Fort Resolution on July 1, 2018. (Photo courtesy of Yellowknife Courthouse)

The impact of alcohol and provocation were discussed as part of Chad Beck’s murder trial for a 2018 incident in Fort Resolution. Beck is facing a second degree murder charge for killing 27-year-old Cameron Sayine with an axe on July 1, 2018.

He has pleaded guilty to manslaughter — the crown rejected the plea.

Both the crown and defence put forward their final arguments to Judge Shannon Smallwood at the Yellowknife Courthouse on Friday.

Beck’s lawyer, Peter Harte, argued that his client was provoked and affected by alcohol when he took Sayine’s life.

He says everyone who knows Beck describes him as a quiet guy who respects his Elders.

Harte said that Beck was bullied by Sayine for years and had been assaulted by him on the day of the incident.

“At some point the bullied victim lashes out,” Harte told the court.

Moments before the incident, Sayine was arguing with Beck’s cousin.

Harte said Beck was scared for his cousin when he left the house and re-entered with an axe. However, Beck immediately struck Sayine in the back of the head — killing him instantly. He swung a second time, which Harte argues proved that he was too intoxicated to realize what he was doing.

Harte also talked about panic attacks that Beck has been dealing with for several years, something he was only diagnosed with once he went to jail. He said this condition may have played a part in the incident.

Jill Andrews, crown attorney, argued Beck didn’t act out of passion. She said instead of grabbing the closest object, he went outside the house and took time to pick up an axe — a weapon he was familiar with — before returning to deliver the deadly blow.

Andrews described the situation as “a violent one-sided attack by Chad” that was totally out of proportion.

She also argued there isn’t enough evidence to say that he was extremely intoxicated, in response to Harte’s argument.

Andrews said there weren’t many empty bottles found at the house where the incident unfolded. She said Beck may have been mildly intoxicated, but not enough to justify his actions.

“His motor and cognizant abilities were not impaired,” she said.

Andrews said the fact he chose to move Sayine’s body and attempted to hide the axe shows he was aware of what he was doing.

She also countered Harte’s argument about Beck’s panic attacks, that he wasn’t experiencing one during the incident meaning it has little relevancy.

The trial will reconvene for a decision on May 21.