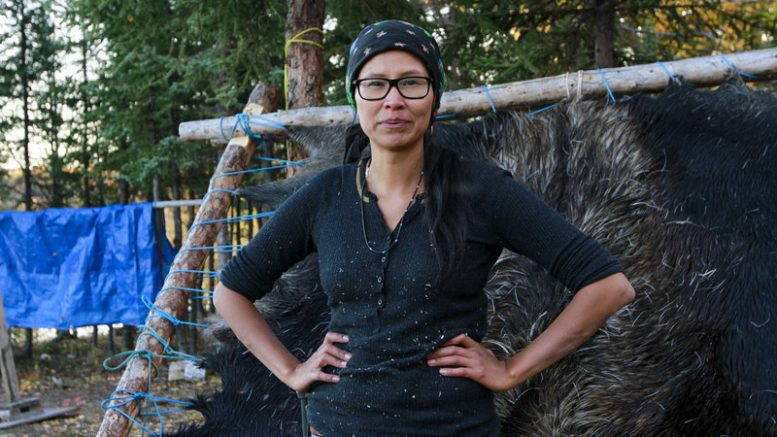 Melaw Nakehk'o stands in front of a moosehide before she begins the process of tanning it. (Photo courtesy of Lesley Johnson.)

Indigenous representation and cultural revitalization will be important themes showcased at the Líídlįį Kúę First Nation (LKFN) Film Festival. It will also showcasing the work of two local filmmakers.

“I am just so happy that it’s being shown in my hometown,” Nakehk’o says.

The 47-minute documentary follows Nakehk’o’s journey of cultural resurgence and revitalization, as she, along with two other women, learn the practice of moosehide tanning from Dene Elders across the Northwest Territories.

Nakehk’o says the film captured a special journey for her, learning some of the work done by her ancestors.

“I have an understanding of them and a better connection to my grandmother who I never met, which is an incredibly beautiful feeling,” she says.

The film also established important connections between Nakehk’o and the women she learned from.

“They’re just doing so many amazing things in our communities with their hide tanning camps,” she says with emotion. 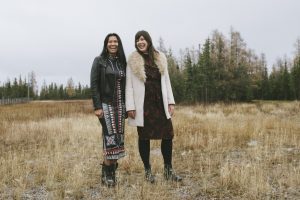 This was something Lesley Johnson, the film’s director, says stood out to her.

“They were all learning from Elders, in their home communities. And that is a really special relationship,” she says.

Moosehide tanning as act of resistance

The documentary was initially intended to serve as an educational tool, but grew into a powerful film showcasing a revolution against racist colonial policies.

“A direct result of those policies is that all of my aunties and uncles, parents went to residential schools. They didn’t learn how to tan hide. So I’m a generation removed from this knowledge,” Nakehk’o says. “This act of seeking out this knowledge and reclaiming this for myself and my family and my community, is an act of resistance.”

This theme of resistance and revolution is showcased throughout the film, including footage of the Moosehide Tanners Against Fascism protest in Sambaa K’e in 2012.

This was a protest against former Prime Minister Stephen Harper’s attempt to pass omnibus Bill C-38, a controversial budget bill that made changes to environmental laws.

“You can’t tan hide without being connected to the land, because a lot of your resources and a lot of the materials that you need to tan hide comes directly from the land,” Nakehk’o explains.

Melaw won’t be the only Nahkehk’o who’s work will be showcased at the event. Her brother Dëneze Nakehk’o’s film “I hold the Dehcho in my Heart/ Sedze Tah Dehcho E’Toh” will be screening Monday as well.

The film follows a group of Indigenous students with the Dechinta Centre for Research and Learning who paddle the Dehcho (Mackenzie River) for six weeks in 2017.

In the process they visit various communities along the river and reconnect with Dene culture.

“So it was definitely a journey. It was was tough at times… But all those types of things, I think, lead to a worthwhile endeavor,” Dëneze explains.

Dëneze says he is happy the experience is captured on film and he likes to revisit it every once in a while.

The film was also directed by Johnson.

For her, a favorite memory is when the students attended a language class for Dene Zhatié in Tthets’éhk’edélî First Nation (Jean Marie River).

“It was just a really nice way for the group to come together to learn language, which is really important,” she says.

Bringing representation to the screen

Dëneze says an important benefit of the film festival is that it brings Indigenous representation to the screen.

“I think it’s really important to be able to see people that look like you on TV, in print, or listening to people on radio and in photos,” he says. “The history of media and journalism is really from a European, western perspective. A lot of the historical stories in film, radio, television, print, anything out there about Indigenous people is usually from a non-Indigenous perspective.”

“To see local people on the screen engaging in cultural revitalization is really, really important,” she says.

Pilling adds she hopes the films will encourage young people to continue this work.

“I think getting to see northern films, and Indigenous people on screen can inspire the next generation of filmmakers,” Pilling says.

Films featuring the Dehcho, including “I hold the Dehcho in my Heart” and “Revolution Moosehide”, will begin screening at 7 p.m. on Monday at the Fort Simpson Recreation Center.

Due to COVID-19 restrictions, a maximum of 25 people can attend, tickets must be purchased in advance and anyone interested can find tickets here.

The film festival will continue throughout the week until Saturday.

‘Don’t be afraid to speak up’: Fort Simpson teen speaks against bullying on Pink Shirt Day


A plebiscite was held on Nov. 12 to determine whether restrictions should be removed.