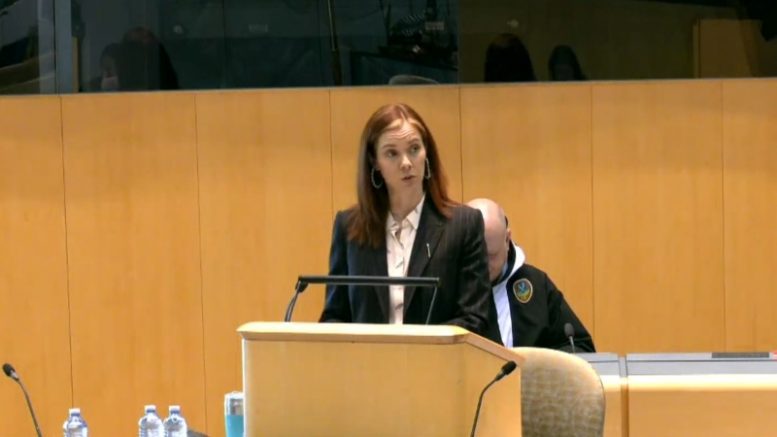 With the territory and much of the world still grappling with the COVID-19 pandemic, the minister of Finance said it’s not the time for the government to make cuts.

“That would not give the sense of security that we want people to have,” she told reporters during a briefing. “I hope everyone will know that with a budget like this that we’re putting in the effort to ensure that the government is there. We’re here for residents, we’re a little like a safety blanket… We know people are facing challenges but the government will be there to support you.”

In her budget address, Wawzonek said she was “cautiously optimistic” about the NWT’s economic future.

That’s despite senior officials warning that “the current fiscal plan is unsustainable.”

This year’s budget forecasts an operating surplus of $69 million, but that money is mainly to finance capital projects. Total revenues are $2.19 billion and total expenditures $2.12 billion.

In a briefing with reporters, officials said the COVID-19 pandemic has added to financial pressures already present. A combination of increased spending — especially in health — and fewer own-source revenues, the pandemic caused “severe economic disruption.”

Despite this, the budget outlines $117 million in additional spending compared to last year. That amount accounts for $104 million for “program enhancements” (including funding the COVID-19 secretariat) and $14 million coming from federal transfers.

Through funding and transfers, the federal government has offset much of the expenditures associated with the pandemic, about $123 million of the $156 million projected costs and revenue loss. The COVID-19 secretariat is budgeted to cost about $35 million this year. However, that estimate was done prior to the GNWT announcing it would no longer cover isolation costs for non-essential travel. Officials now expect the secretariat to come in under budget with the policy change.

In her address to the Legislative Assembly, Wawzonek said the budget is not a one-time government plan for economic relief from the pandemic.

“Our recovery cannot be a one-time event; it will need to reflect the changing landscape of this pandemic, including vaccine rollout here and across Canada and the speed of the global economic recovery.”

Resource royalties in the revised 2020/2021 estimates dropped to zero. The royalties mainly come from the mining sector and only when the companies turn a profit. In the 2021/2022 budget that only bumps up to $1.5 million. Before the pandemic, those were expected to be $30.6 million.

The budget anticipates total short-term debt to grow to $632 million, reaching $1.6 billion of the $1.8 billion borrowing limit. Much of that short-term debt is associated with an “aggressive” capital plan worth more than $450 million. Under current projections, the NWT is expected to surpass its borrowing limit by the 2023/2024 fiscal year.

The department’s proposition to fix that is to go through what it’s calling Government Renewal. Wawzonek announced the initiative in October, which is basically going through each department to evaluate how they’re spending money. The process has started with the departments of Finance, as well as Education, Culture, and Employment. The process, Wawzonek said, is to focus spending to be more “value-oriented”  but what that looks like in practice is still unclear.

“Government renewal will have a big-picture impact on our fiscal situation, but we can’t just rely on that,” says Wawzonek. “I want to ensure that we are doing what we can to pull levers towards increasing own-source revenues too.”

She added that she’s “hopeful” the process will be done by the end of the 19th Legislative Assembly.

The territorial government’s workforce continues to grow. The 2021/2022 Main Estimates show a staff total of 6,201 people — nearly 300 more than in last year’s budget. About half of those new hires work within the COVID-19 secretariat. Even without those hires, the GNWT workforce has grown by about 150 people per year since the 2018/2019 fiscal year.

When asked whether salaries may be reviewed as a way to diminish costs, Wawzonek said that was controlled by the collective agreement with the Union of Northern Workers that represents GNWT employees.

“We have a good relationship with the union right now, so we’re not going in with an expectation of cuts,” she said. “The public sector is a huge component of the economy and the salaries wind up recycling into the economy… Having a strong and stable public sector is allowing a lot of those other areas to not see the impacts that some other jurisdictions might be seeing.”

In her address, Wawzonek laid out her reasons for optimism being: 1) the resilience of northerners; 2) having a financial sector “insulated from even greater shocks” caused by the pandemic, thanks to a large public sector and federal transfers; and 3) the “foundations” in place for a stronger economy with investments in education, health and communities.

Now regular MLAs will spend the next few weeks responding to, debating, and ultimately deciding whether to approve the budget or not.