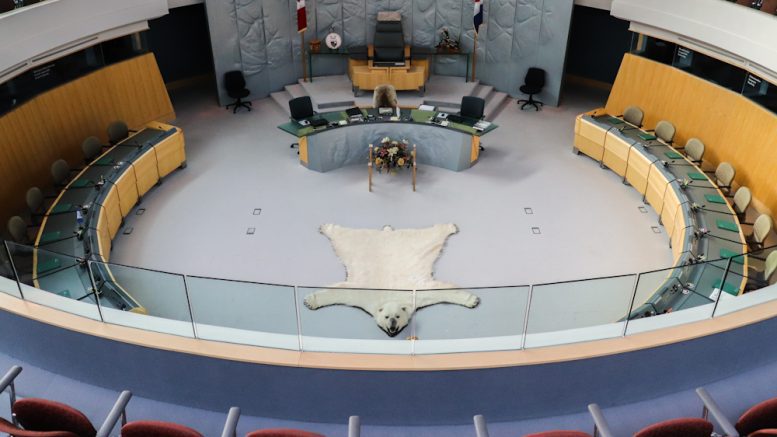 The territorial government is working on an Indigenous recruitment and retention framework to try and address an ongoing lack of representation within its workforce.

Indigenous staff levels have been around 30 per cent for years.

Caroline Wawzonek, minister of Finance, is in charge of human resources. She announced the framework on Wednesday in the Legislative Assembly, saying that it will have hiring targets for every department, including management positions. Those targets are not yet known.

The GNWT’s Affirmative Action policy has several categories for employees. The relevant one to this conversation is Priority 1 (or P1) staff, defined as “Indigenous Aboriginal Persons.” (“Indigenous Non-Aboriginal” are people that were either born in the territory or have lived here more than half their lives. Last year, Michael Nadli, then-Deh Cho MLA, called the language “outdated”.)

According to the 2019-2020 Public Service Annual Report, the government department with the highest percentage of P1 employees is Environment and Natural Resources at 44 per cent; the lowest is Health and Social Services with 17 per cent.

Comparing the latest public service annual report to the one in 2018-2019 shows the GNWT workforce has grown by 500 employees to 5,788 total. Only 156 of those are Indigenous Aboriginal hires.

As part of her announcement, Wawzonek said the GNWT is reworking its cultural awareness and sensitivity training for its employees.

“I certainly hope it’s not a video training program,” responses Jackson Lafferty, MLA for Monfwi. He said the department of Finance should engage Elders to be part of the training.

He also brought up the discrepancy between Indigenous Aboriginal men and women hired within the government: 21 per cent women and only nine per cent men.

Wawzonek said there would not be gender targets for Indigenous Aboriginal hiring targets in the upcoming framework.

The rate of P1 employees drops to 18 per cent when looking at management positions across the GNWT.

Deh Cho MLA Ron Bonnetrouge pointed to the Leadership Development Program, where employees can shadow managers to ensure succession. However this program stopped this year due to the pandemic.

But Bonnetrouge referred to his own time as a government employee and said the program was not well-used.

“Nobody wanted to recognize it,” he said.

Wawzonek said succession planning would be part of the upcoming framework. She later added that there are career advice services within the government’s HR department, including interview preparation.

In answering other questions, Wawzonek said that since taking over as minister of Finance, one of the most common complaints she hears is around staffing representation, especially in management.

“In the vast majority of the cases that come forward when they are investigated, in fact, the policies have been applied and have been followed, and yet, the stories and the concerns keep coming,” she said. “There is some sort of disconnect where people are applying and going through these processes and feeling that they’re not being heard, and yet, the application of the process itself is being followed.”

Katrin Nokleby, MLA for Great Slave, pointed out these are internal investigations.

“I do believe that people are not lying to me from the public service,” replied Wawzonek. And added, “That doesn’t mean that we don’t have things to fix.” She also clarified that staffing appeals are done independently.

“As much as I think cultural awareness training is a step in the right direction, there’s really nothing that replaces going to work for an Indigenous government and seeing their struggles,” said Rylund Johnson, MLA for Yellowknife North.

Wawzonek said only eight employees are currently seconded to Indigenous governments; her department only has 10 placements a year and funds up to $40,000.

The framework and implementation plan should be in place next year.

Joe Dragon ‘relieved of duties’ as deputy minister of infrastructure