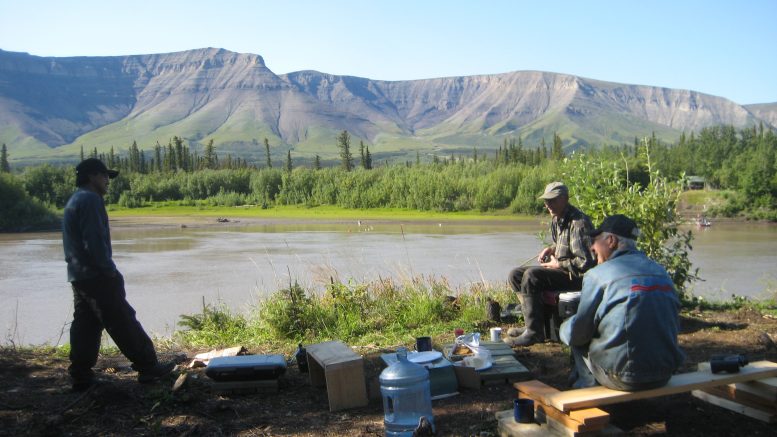 John Carmichael and friends out on the river. (Photo courtesy of Amy Amos)

“He taught me everything I know,” says Harry Carmichael, John’ son, but “I’ll probably never have the fishing knowledge that he has.”

Harry says he has “mixed feelings” taking over for his father.

This comes after celebrating John Carmichael’s 25 years of service to the program.

The program allows residents along the char’s migratory route to collect data and make regular recordings, aimed at sustaining the char in the community.

Over the years, John has taken detailed notes on the trends of char fishing and trapping at his camp.

CKLB has reached out to John but his family says he’s currently in hospital. 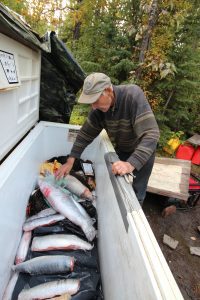 “He was born a trapper, I wasn’t,” says Fred Carmichael, John’s younger brother.

“You got to have a passion for it,” he adds.

Fred says Harry took right after his dad and fits the role well.

“Fulltime trapping is a thing of the past,” he says, these traditional skills are dying.

“He really contributed to the conversation,” says Amy Amos, executive director for the Gwich’in Renewable Resources Board.

“He knew the fish and he knew the land,” she adds.

The program aims at helping biologists understand the char better, says  Amos, giving Elders and community members a chance to be a part of the conversation.

“I strongly believe that our Indigenous voices need to be at the table,” she adds.

Harry admits the role of char monitoring has been in the family for generations because of where his father’s camp is located on the river.

“There’s no place else for anybody to do the program,” Harry says, “so it stays in the family.”

Harry remembers going out on the land, trapping and fishing since he was nine years old.

It means a lot to take this project on, Harry says, “this was the place where we enjoyed ourselves the most.”

Harry plans on doing things just like his father before him, tracking water levels, char trends and environmental changes.

Following in his father’s footsteps, Harry feels a sense of responsibility to carry on what his father left behind.

Harry says he’s most interested in looking after the family camp and making some extra money on the side.

Once a year the char monitors come together with the Gwich’in Renewable Resources Board to discuss their findings.

This program is a collaborative effort between the Gwich’in Renewable Resources Board and the federal department of Fisheries and Oceans.