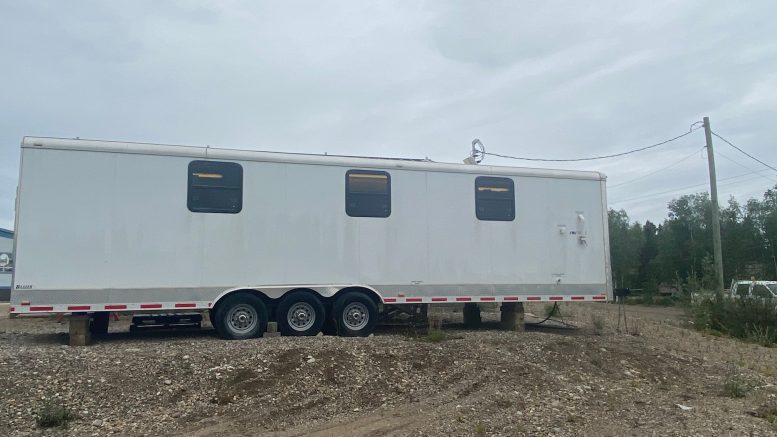 A trailer in Fort Good Hope has been converted into a meat processor. (Photo courtesy of Chris Pereira)

Last week the department of Environment and Natural Resources was called into the community to deal with muskox near the airport. Instead of letting the dead animals go to waste, Chris Pereira, manager with the Fort Good Hope Renewable Resources Council, decided to put the trailer to use.

“We thought it was a good idea to get the meat and process it and give it out to the community,” Pereira says.

Muskox have become a common sight in the Fort Good Hope area, says Thomas Manuel Sr., an elder in the community.

Around 60 years ago the meat was a popular option in Fort Good Hope, he adds, but has since lost its appeal.

“The meat is really tender and to me it’s good,” he says, “I eat them, but there’s a lot of people in town that don’t.”

“Young people weren’t brought up with it,” he says.

Clayton Lafferty, the butcher at the trailer, says muskox meat is good and expects it to catch on.

“It’s the same thing as moose,” he says.

Going forward Pereira says he hopes to keep the trailer running — offering country food such as meat, fish and berries provided by community members, at an affordable price.

He also plans to employ two full time staff as well as several other casual employees for the cut and wrap service.

‘I’m asking people to be safe and to take this seriously, because it’s real’