Open for over 40 years, École J.H. Sissons is now being demolished and later rebuilt.

“It’s both an exciting and sad time. YK1 is family, it’s going to be emotional for a lot of people,” says Tina Drew, chairperson for the board of trustees for Yellowknife Education District No.1.

This long-standing piece of community history will be holding a closing ceremony at 2:15 p.m. on June 26th.

The event will take place in person (by invitation only) and online, due to the risks of COVID-19. 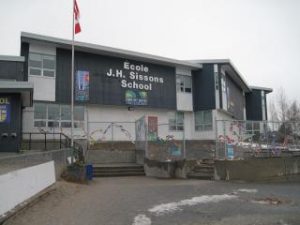 Out with the old and in with the new

In an interview with CKLB radio, the superintendent/CEO of Yellowknife Education District No.1, Metro Huculak, explained that the most cost-effective decision was to tear down the old school and build a new one.

According to Huculak, it was an ongoing challenge to get the community on board for this change. And an even greater challenge to move 300 kids to another building in the interim.

When asked why they chose to rebuild as opposed to renovate the old building, Drew says, “The school has a lot of different problems and there would be no guarantee of a complete fix. The estimated costs would be far greater to fix the old school than to simply build a new one.”

In the process, renovations will be made to École William Mcdonald School and École Sir. John Franklin High School to keep up with the influx of students.

In addition to the renovations, four portables and one washroom portable will be available July 4th and operational July 15th.

“If all goes well, the demolition process will begin sometime in October 2020,” says Huculak.

The new building will have a larger gymnasium, an updated library system, built-in quiet zones, and more accessibility.

A document for parents and faculty, outlining the different stages of the building progress will be made available in the next coming months.

“It’s in the hands of the department of Infrastructure now,” says Huculak.

CKLB radio has reached out to the department of Infrastructure for a comment regarding the preemptive planning of the demolition and the dates to follow.