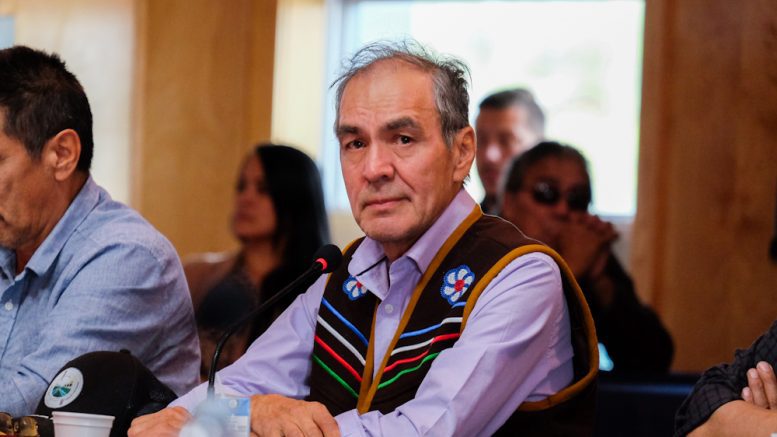 Yakeleya said an all Dene chief’s meeting was convened on Thursday to discuss the incident with Adam, who told the council he was assaulted by the RCMP officer and is pursuing legal action.

“We are appalled by what happened to one of our chiefs,” Yakeleya said.

Adam is charged with assaulting an officer and resisting arrest, but the Alberta Serious Incident Response Team said in a press release the matter is being investigated.

The incident occurred on March 10, outside Fort McMurray, Alta. It started with the Wood Buffalo RCMP investigating Adam’s vehicle for an expired license plate, a press release said.

The dash cam footage shows a confrontation between Adam and an RCMP officer. In the video Adam alleges he is tired of being harassed by police and at one point the officer is seen grabbing Adam’s wife.

As the officer attempts to arrest Adam, a second RCMP officer runs at Adam, tackling him to the ground and punches him in the head. Adam is then brought to the police cruiser with blood pouring down his face.

The press release said the video capturing this incident was reviewed by superiors who determined the officer’s actions were “reasonable and did not meet the threshold for an external investigation.”

The public had a different reaction to the footage as well as photos of Adam’s bloody face that were later released.

I’m a member of the Athabasca Chipewyan First Nation & am overwhelmed by the hateful comments directed towards our Chief, Allan Adam. Since everyone seems to have an opinion on whether the police assault on him was warranted, here are a few points worth considering:

Reaction to the incident

Prime Minister Justin Trudeau said in a press conference he was alarmed by the incident.

“Like many people I have serious questions about what happened,” Trudeau said.

Yakeleya said he doesn’t think this situation would have happened if Adam was white. The fact that no supervising officers were alarmed by the footage reflects discrimination within the RCMP, Yakeleya said.

“Systemic racism is in the RCMP,” he said.

In terms of a solution, he said the RCMP needs to change their policies to understand the communities they work with.

“It goes back to having them trained, to really know the Indigenous people,” Yakeleya said. “The RCMP needs a shakeup.”

Yakeleya added he wants to have a good relationship with the RCMP and there are opportunities for that to happen.

“There are some RCMP members who have worked well within the community,” he said. “We want to work with the RCMP… It’s a hard process to change their attitude.”

Yakeleya said he thinks it is time for the chiefs to sit down with the RCMP to look at the way enforcement is done in the communities.

He added certain communities are in need of more RCMP support to help with issues such as bootlegging.