Andrew Robinson is one of the co-authors of Alternatives North's study Getting the NWT Off Diesel. (Screen capture)

Alternatives North says the NWT could cut its emissions in half within five years — and become carbon neutral within 15 — if the territorial government bought carbon offsets.

That’s one of three recommendations the organization presented to members of the Standing Committee on Economic Development and Environment last week.

Alternatives North recently undertook a study called Getting the NWT Off Diesel that wanted to answer two questions: How much would it cost to cut NWT emissions by 50 per cent and how long would it take?

Andrew Robinson is a retired engineer and former executive director of the Arctic Energy Alliance. He co-authored the study with Lachlan MacLean, the former chief mechanical engineer at Ekati Mine.

Together they estimated the NWT uses about 7,200 B-Train trucks-worth of diesel every year. About three-quarters of that is used at the mines.

Robinson and MacLean analyzed eight strategies to cut emissions in half, ranging from wood pellet boilers, to wind and solar power, to the proposed Taltson hydro expansion project. They determined the two that would produce the best bang-for-NWT-residents-buck within a short time is to buy carbon offsets and invest in renewable diesel.

They also recommended installing community wood pellet boilers and capturing the waste heat from current diesel generators. They estimate the upfront cost for these boilers to be about $140 million, but that the government would see $80 million in profit over the next 20 years. They also estimate the boiler and heat capture combo would reduce heating bills by 20 per cent. However, these are small fixes since they calculate communities make up only one-quarter of the territory’s total emissions.

Ron Bonnetrouge, the Deh Cho MLA, brought up the proposed transmission line from the Taltson network that would run from Hay River to Kakisa, and branch off to Fort Providence, removing the community’s reliance on diesel.

“In the long run, I see the transmission line as a real saviour to climate change,” he said. That line has been discussed for years without much progress.

Proponents, including the territorial government, say the expansion would allow for greater power generation capacity and attract mining in the Slave Geological Province.

Robinson said a transmission line into the South Slave looked “more feasible” than trying to “chase mines around the tundra as they pop up and go down again.” He added, “The people in the South Slave are not going anywhere. In the long run, I think you could make better use of the hydro power in the communities.”

Again, these initiatives would only account for relatively small-scale reductions; the study estimated cutting only about 5.5 per cent of current diesel use if communities installed wood pellet boilers and heat capture technologies.

Now, to reach 50 per cent reductions in a short amount of time, that’s where carbon offsets and renewable diesel come in.

Money out the door?

Carbon offsets are essentially a way for residents, corporations and governments to cancel out their emissions by funding green projects elsewhere. Robinson presented the idea as immediate action the territorial government can take as it develops long-term carbon reduction solutions. To cancel out half of its current emissions, the study estimated the government would need to buy $15 million-worth of offsets per year — the cheapest reduction option.

Rylund Johnson and Kevin O’Reilly, MLAs for Yellowknife North and Frame Lake, each brought up the sticky political situation of sending millions to projects outside of the NWT.

Seeing as how most of those emissions are coming from industry, Johnson suggested bringing regulation that would require the major polluters to purchase carbon offsets themselves instead of government spending that money.

Robinson replied that if viewing climate change as an emergency then “we expect government to take the lead in responding to it.” He also suggested changing regulations of the current carbon tax to put that money towards buying offsets.

Critics have compared carbon offsets to buying a license to pollute because they don’t incentivize people to change their behaviour.

Robinson indirectly addressed this by saying, “Mother earth doesn’t actually care. That line on the map was drawn by some colonial guy a while ago and it’s not that important to the environment where we do our emissions reductions.”

The above is a crude analogy. Renewable diesel is plant-based but nowhere near the same as vegetable oil.

If the territorial government was to start using renewable diesel in the current generators across the NWT, the authors suggested it subsidize the additional cost of using renewable diesel. To do so, they estimated, would cost $65 million a year — the second cheapest option after carbon offsets.

Much of the production and sourcing of renewable diesel right now is done in the U.S. and overseas, according to MacLean, the study’s co-author. However, he said based on the NWT’s current power needs, it could source all of its renewable diesel from British Columbia, Alberta and Saskatchewan.

The territorial government has been touting the Taltson hydro expansion as a panacea for all of its energy woes.

This study disputes that.

“There is an energy strategy that’s been in place for a few years and it does not look much like the results of our study,” said Robinson. “It seems to be focused more on the most expensive and least effective ways of reducing emissions.”

He added that most of the numbers in the study come from the government’s own documents.

The estimated cost of the Great Slave Lake transmission line to expand the Taltson hydro system is $2.8 billion; over 20 years, that’s still $140 million per year. The study argues that even if the construction costs were 100 per cent funded by the federal government, the maintenance costs would still be more expensive than the solutions proposed above. And the expansion would still need to be paired with other reduction initiatives to cut total emissions in half.

Despite these figures, Frieda Martselos, MLA for Thebacha, said she stood behind the project. She said Indigneous residents like Salt River First Nation, where she used to be chief, could see benefits from the transmission line project. She said her mandate was to support the project into the future.

“I want to make that very clear to this group,” she said. “I have a group of Indigenous people that are going to own part of this Taltson expansion.”

The study also looked at other renewable energy opportunities like wind and solar. Robinson and MacLean concluded that these would also be too expensive to deploy at a large scale around the NWT. 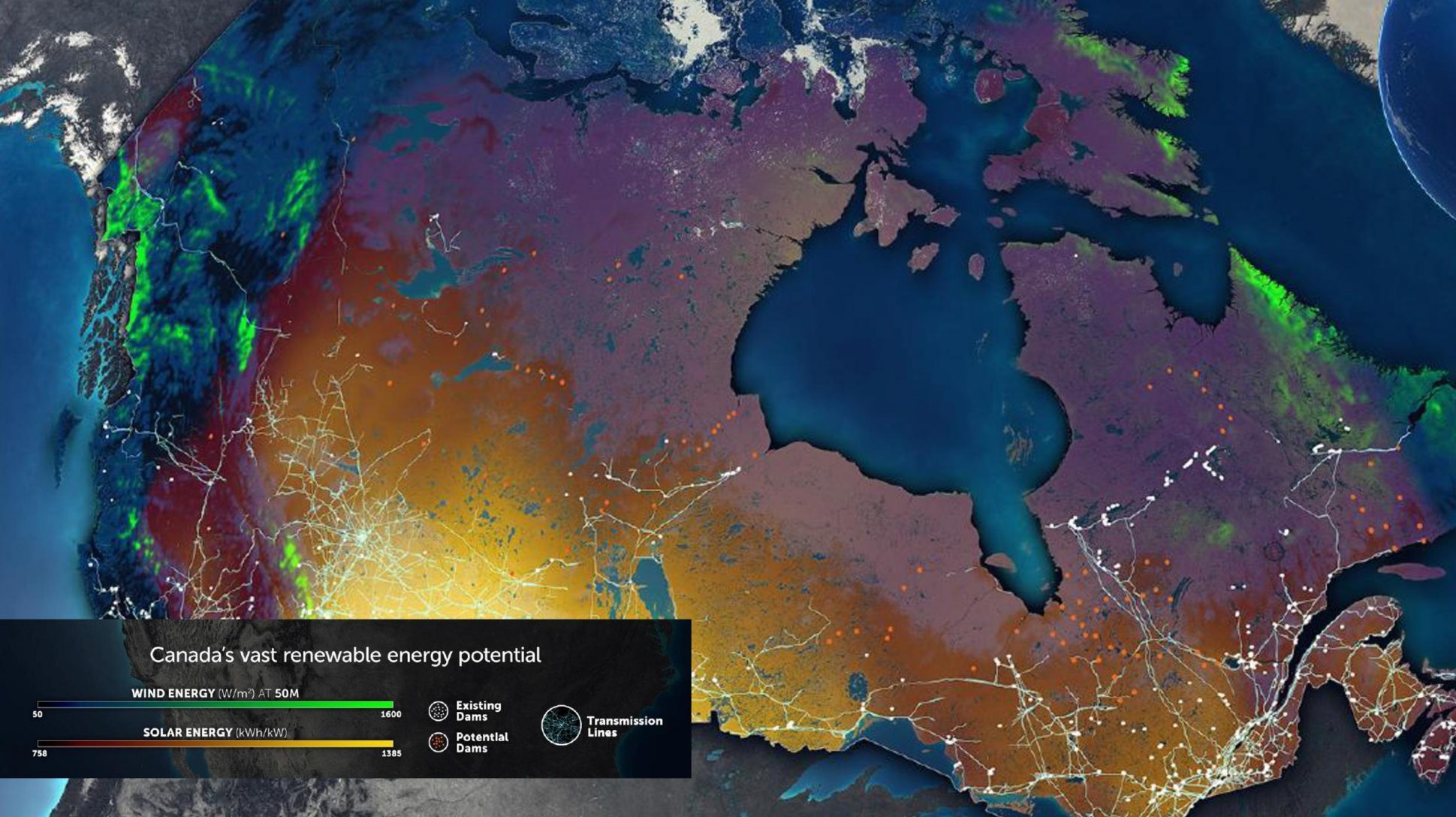 This map shows the opportunity for wind and solar technologies in Canada. The NWT is largely dark showing very low opportunities for these technologies. (Map was included as part of Alternative’s North presentation.)

Geography also plays a substantial role in what kind of technology can be used in the North.

Solar panels would need large, expensive batteries to be used throughout the short winter days; wind turbines could work on the arctic coast (see the Inuvik wind project) and at mines, but wouldn’t reduce diesel use like the other options.

A grain of salt

During the presentation, Robinson explained the study had limits. He and MacLean have a combined more than 25 years of experience in the northern energy sector, but it was not submitted for peer review. He added that much of the time spent on it was volunteer and that it was low-budget, spending less than $10,000 to put it together.

Robinson said that working through a non-governmental organization like Alternatives North allows the authors to be independent.

“We can look at things from a different perspective and provide feedback,” he said. “We don’t want to pretend our study is more than it is.”

At the very least, it’s a starting point for a larger conversation about coming up with innovative strategies to address the unique energy needs in the North.