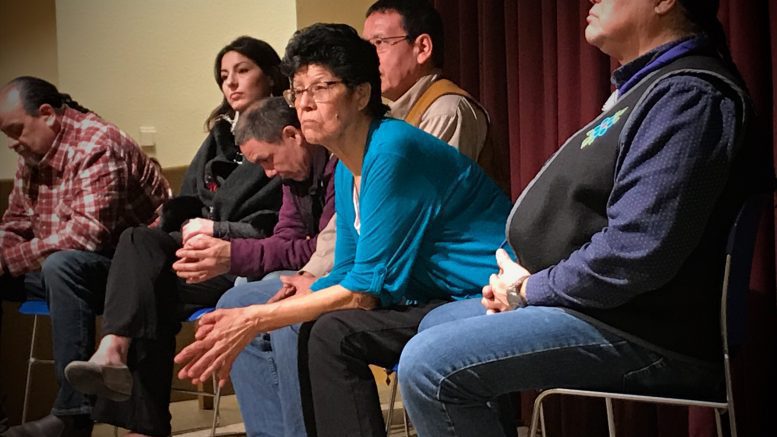 Eric Wardell’s story begins with him talking about how the world was not designed for people with fetal alcohol spectrum disorders (FASDs).

“I didn’t see anything wrong with stealing,” Wardell said in the film. “I have over 80 convictions on my record.”

Wardell was one of eight people to share his story at Turning Points, a series of documentary shorts about alcohol, addiction, resilience and recovery in northern communities were shown to a packed audience at the Prince of Wales Northern Heritage Centre on Saturday.

The documentaries featured Chief Ernest Betsina, Catherine Lafferty, Donald Prince, Devin Hinchey, Louise Beaulieu,  the late Muriel Betsina, William Greenland and Eric Wardell. Each film was about five minutes in length and highlighted the cast’s battle with addiction along with their road to recovery. The films were produced by the Global Reporting Centre, at the University of British Columbia (UBC).

Out of 80 convictions that Wardell has on his record, 40 of them are for a break-and-enter. Wardell says he didn’t break into houses or carry weapons but he did break into businesses for the money to fuel his addiction. For many decades, Wardell said he cycled in and out of jail.

“I would take the money and run to my sister and party,” Wardell said. “You know drinking and hotel rooms and when the money was gone I would go and do another break-and-enter.”

Wardell says that as a child, he was taken from his family and given to a non-Indigenous family.

“I lost my identity and my language,” Wardell said.

A traumatic event led Wardell to begin stealing at the age of six until he was 46-years old.

Wardell says he never gave up on himself, which eventually led him to enroll in a wellness program for 16 months and eventually to sobriety.

According to a news release from the producers, unlike traditional parachute journalism, which often involves an outsider coming into a community and taking stories away to share with audiences back home, the storytellers in this project are the authors and producers of their narratives.

“Each story touches on a different success or challenge related to alcohol use,” states the news release. “The video stories directly confront harmful stereotypes and misinformation about alcohol use and Indigenous peoples in the Canadian North.”

-With files from John McFadden