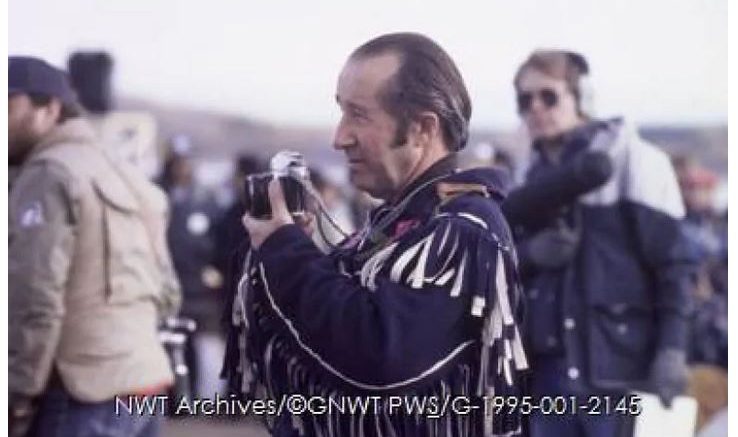 Renowned French photographer, author, film maker and retired Oblate Priest Rene Fumoleau has died. He was Born in France in 1926 and came “down North” to Denendeh as a young priest in 1953. His first parish was in Rádeli Kóé/Fort Good Hope, which involved a long boat journey down the mighty Dehcho/Mackenzie River.

Over the decades, his attachment and commitment to the Dene deepened. He celebrated the strength of their culture and committed himself to help with their desire for change. He helped through his writings, such as his first published book “As Long as This Land Shall Last,” as a contribution to the struggle over land claims. He also directed two films, I Was Born Here and Dene Nation. He also took thousands of photos, now housed in the Prince of Wales Northern Heritage Centre in Yellowknife. The Museum uploaded this slideshow tribute in his memory this morning.

There’s been an out pour of memories and stories shared today over the news of his passing. Former Deh Gah Gotie Chief, and CKLB broadcaster Joachim Bonnetrouge writes, “he become and thought like a Dene Elder.”

Close friend who sat with Fumoleau hours before his passing Patrick Scott shared some kind words on Facebook.

“René was a human being at a time when we are an endangered species, an exceptional person and a friend,” writes Fern Denault another former close friend of Fumoleau’s. René began creating stories of his experiences in 1988, writing them first in two books of poetry, “Here I Sit,” and “The Secret,” and then telling them at events and festivals such as the Northwords Festival.

He initially retired to LutselK’e, and stayed in Behchoko, before moving to the Aven’s Centre before his passing. Rene Fumoleau was 93.

There will be a public visitation on Friday August 9th, from  5-8 pm at the McKenna Funeral Home in Yellowknife. Details of the celebration of Rene’s life have yet to be shared.